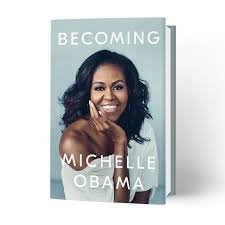 Description:  Michelle Obama’s self written book contains life story of her upbringing to life in White House. As first African American women to serve this role ‘First Lady of United States’, how she created new history of white house and she established herself as powerful and compelling advocate for women and girls in the world. She stood by her husband during the election campaign and after winning every time when he led America through some most traumatic moments. The memoir is a reflection of her hard work as a great storyteller with the sense of wit and fun. Along with it, she raised two wonderful and down-to-earth daughters under the hostile media glare.

Michelle Obama allows us to peek into her world of experiences that have shaped her from a gal of south Side Chicago to her time spent in most famous address ‘White House’. She describes her wins and failures in both public and personal life.

The book tells us the voyage of balancing between the demands of motherhood and being an executive.

Review:  Becoming is completely self-calculating of a women’s soul and substance who has steadily broke that thin glass to achieve the dream, live on her own terms and defies all the expectations. Michelle Obama’s story truly inspires us to do the same.

It is a rich and candid memoir.  The book reveals various layers about the positive personality of Michelle Obama and how she has become what is she today. Her silver tonged writing is honest and spell bound. Michelle Obama incarnates kindness, decency, wit and -above all - intelligence through ‘Becoming’.

The book is genuine page-turner full of intimacies and memory reflections. Each chapter brings out a thrilling story of her life with the hint of her sharpness and wit.

She writes all about people, values, and thoughts. However, political experiences do play a big part in her life, though she doesn’t write much about it or Advocate side.

The memoir is purely from the heart of a prodigious woman who writes about being through the discriminations as well as little but important things in life like family, love and fun. She writes about how it helped in achieving her dreams of helping women around the world while being at the most influential post. Along with that, the book tells us how possibilities knock at our doors that you just need to welcome them but not leaving your roots on the ground!

About the Author:  Michelle Robinson Obama is the first black woman who served as the First Lady of United States of America from 2009-2017. Mrs. Obama is a graduated of Princeton University and Harvard Law School. She started her career as an attorney at the Chicago Law Firm where she met Barack Obama, her future husband. Later, she worked in Chicago mayor’s office and at the University of Chicago Medical Center. She has helped women and girls in certain ways and stood up for them. She also founded the Chicago chapter of Public Allies, organizations that prepares young people for careers in public service sector.

She is the author of few fantastic books like American Grown (2012), Michelle Obama: Speeches on Life, Love and American Values, series of Becoming - which includes memoir ‘Becoming’. ‘Becoming’ has sold more than11.5 copies around the world.

Michelle was a co-writer of Be Vigilant But Not Afraid: The Farewell Speeches of Barack Obama and Michelle Obama.

She currently lives in Washington, DC with her husband Mr. Barack Obama and two daughters - Malia and Sasha.