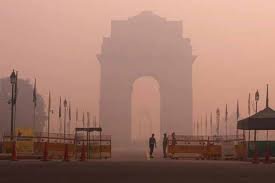 New Delhi: Delhi was enveloped in a thick layer of smog on Sunday morning with the minimum temperature settling at 18.7 degrees Celsius, four notches above the season's average.

The city received 0.3 mm rain in the past 24 hours which slightly lowered the hazardous level of air pollutants in the air.

Relative humidity was 85 per cent at 8.30 a.m., said a MeT department official.

The day is forecast to remain generally cloudy with light rain or drizzle expected later on. The maximum temperature will be around 28 degrees Celsius, he said.

The air seed was around three knots at 8.30 a.m., the official said, adding the visibility was poor due to the smog.

Some respite is expected from the heavy pollution, with strong surface winds forecast in daytime on Monday and Tuesday.

4 of family killed in landslide in Karnataka

Guj: Wasting water in Dahod to invite fine this summer