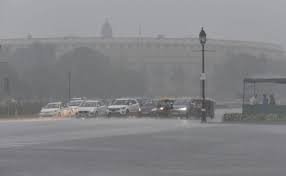 New Delhi: Widespread rains lashed the national capital on Tuesday, leading to heavy waterlogging that threw traffic out of gear in many parts of the city.

Traffic bottlenecks were also witnessed on stretches of Rohtak Road, near Tis Hazari court, from Khyber Pass towards Model Town.

A tree fell on the stretch between the Maharani Bagh and Ashram leading to traffic chaos.

By and large, rains covered the entire city, the weather department said.

More rains are predicted on Wednesday.

Thereafter, the axis of monsoon trough will move towards south of Delhi. Patchy rains at isolated places will continue till August 11-12, Mahesh Palawat of Skymet Weather said.

On July 22, the Safdarjung observatory recorded 50.2 mm rainfall, the heaviest this monsoon. The weather station at Palam gauged 61 mm precipitation on July 18.

More than 65 mm of precipitation is considered heavy rain. Palawat said a combination of weather systems leads to heavy showers.

Overall, it has received 224.2 mm of precipitation against the long-term average of 337 mm since June 1, when the monsoon season starts, a deficiency of around 33 per cent, IMD data showed.

Ladakh MP gets PM's praise for LS speech on Art 370

Sultry weather in Haryana and Punjab