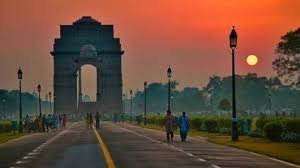 New Delhi: The maximum temperature in the national capital on Saturday settled at 34.3 degrees Celsius, normal for this time of the year, even as high humidity levels caused discomfort to the people.

Relative humidity levels oscillated between 81 per cent and 69 per cent as the city received 0.9 mm rains, the Meteorological Department said.

The minimum temperature was recorded at 27.2 degrees Celsius.

The weatherman forecast a generally cloudy sky with light rain for Sunday. The maximum and minimum temperatures will hover around 35 degrees Celsius and 28 degrees Celsius respectively.