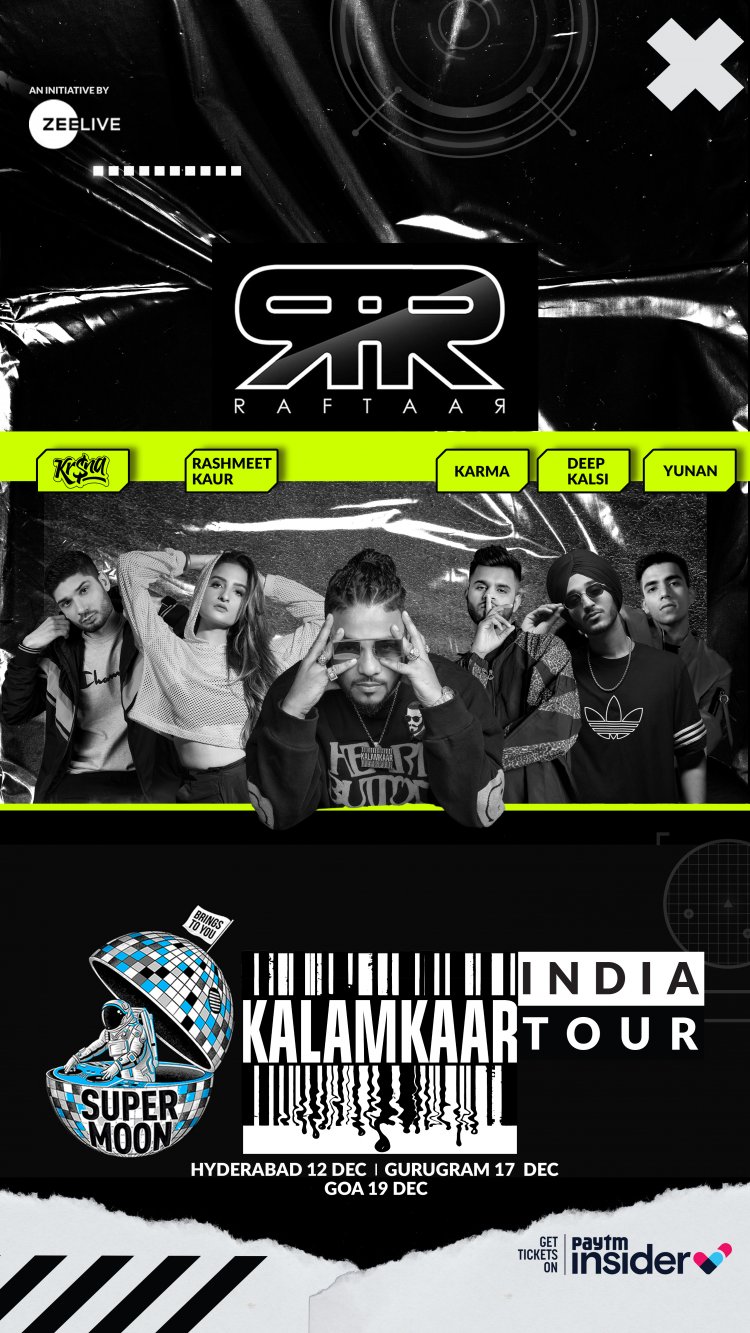 National: Entertainment never stops at Supermoon, as the much-loved platform always ups the engagement quotient for fans with the best and never seen before acts. A few weeks after announcing AP Dhillon’s debut India tour, Supermoon is now back with Kalamkaar India Tour. All the hip-hop fans out there, get ready and polish your rapping skills asSupermoon ft Kalamkaaris coming to a city near you. The extraordinary talent showcase featuring as many assixpopular Indian rap and hip-hop stars will embark on its musical journey fromHyderabad on 12thDecember 2021,moving toGurugram on 17thDecember 2021and ending the tour inGoa on 19thDecember 2021.Tickets for this eagerly awaited experience will be available onPaytm Insider.

The upcoming on-ground concert will give hip-hop fans a chance to be closer to their idols as they perform live on their most popular numbers on-stage. The tour will feature Raftaar, the ever-popular Indian rapper, lyricist, dancer, TV personality and music composer headlining the shows along with electrifying performances by the trending hip-hop artists such as Rashmeet, Kr$na, Deep Kalsi, Karma and Yunan. Along with keeping entertainment at its absolute peak, Zee Live shall leave no stone unturned towards ensuring its patrons a safe environment by adhering to the highest standards of safety and hygiene.

Commenting on being a part of Supermoon ft Kalamkaar, Raftaar, Indian rapper, lyricist, dancer, TV personality and music composer said, “It feels great to be back and team up with Supermoon. In our latest association - Supermoon ft Kalamkaar, I shall be bringing my fans a series of electrifying performances by some of the most talented rising hip-hop stars in India. What really excites me is the fact that the tour will give all of us a chance to connect with our fans directly and enjoy the energy that they bring with them. With a little more than a month to go, I look forward to being a part of this property and giving my fans an event to remember.”

Sharing his thoughts on the upcoming event, Swaroop Banerjee, Chief Business Officer, ZEE Live said, “A year ago when Ankit Khanna, Raftaar and I were discussing the possibility of a tour, it struck us that there has never been a desi hip hop and folk Punjabi entourage like this before. Raftaar is dropping some of the best regional and mainstream tracks like Ghana Kasoota, the super versatile Rashmeet Kaur with Bajre da sitta, one of my personal favorite rap gods Kr$na with tracks that are from the real streets with international Sounds, Deep Kalsi as a music producer, Karma and Yunan who have broken the internet with their new age stuff; I think for the Supermoon hip hop fan there has never been an ensemble of this nature. In Kalamkaar, Zee Live has found partners that stay true to what the audience wants. The 3-city tour could become an international travelling hip hop ensemble in the future.”

Adding his thoughts on the collaboration, Ankit Khanna, Founder and CEO Kalamkaar Music Pvt Ltd said, “Supermoon has been the hallmark of a real concert touring brand, we watched them closely when they toured some of the largest artistes and when Swaroop and I spoke about creating the country’s first desi hip hop & folk tour, everything just clicked. Kalamkaar and Supermoon are families, my partner Raftaar and the amazing artists travelling on this tour are excited to bring an out of the world set for the Supermoon fans and maybe take the Supermoon Ft. Kalamkaar tour overseas as well. Hip Hop deserves this kind of a mega tour and our partnership with Zee Live will ensure that.”

Adding to this, Rashmeet Kaur, the Indian singer and songwriter said, “For any artist, the in-person connect and experience with their fans while performing on stage is definitely amazing and one that can never be replicated elsewhere. After performing virtually in the last two years, I am excited to be performing on-stage and be in the midst of my ardent fans and fellow artists. I am delighted to be a part of the Supermoon ft. Kalamkaar and look forward to the tour and making it one to remember.”

Adele Returns With “Easy On Me,” New Single and Video Out...