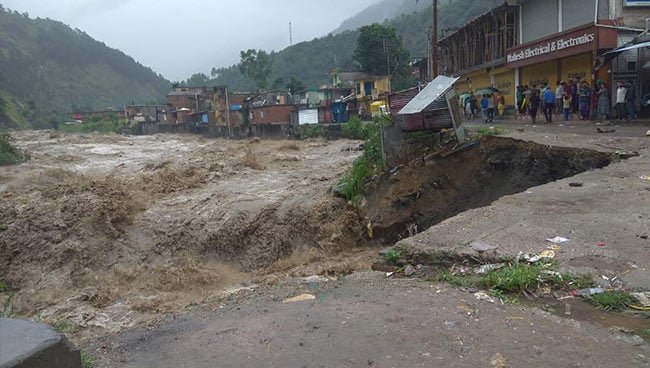 Shimla: The death toll in Himachal Pradesh rose to 25 on Monday with three more people losing their lives due to the rains, which the weather office predicted will continue over the next 24 hours.

Heavy rains have lashed the state since Saturday, causing floods, collapsing houses and triggering landslides that have stranded hundreds of people.

The rains have so far caused damage adding up to Rs 574 crore, according to a state government spokesperson.

On Monday, the rains subsided but officials reported three more deaths that have taken place since Sunday.

Light-to-moderate rainfall will occur at many places with heavy rains expected at isolated places in the state over the next 24 hours, up to Tuesday morning, according to Shimla meteorological office director Manmohan Singh said.

Over 500 people are stranded as several roads are blocked by landslides and flash floods, officials said.

Efforts are on to clear the roads and restore traffic to move them to safer places.

The National Disaster Response Force is diverting the water accumulated in Kangra district's Nurpur sub-division by digging an alternative channel, an official said.

Multiple landslides blocked the flow of water in streams and formed a big artificial lake in Khadetar village in the sub-division.

Residents of Trindi, Danni, Mairka, Lador, Thana, Hindorghaat, Letri and Jassur villages have been asked to vacate their houses and move to safer places, the official added.

The incessant rainfall for two days damaged water pipes and hit supplies in Kangra district, another official said on Monday.

He said the water supply lines were being restored but it may take two or three days.

In Kullu district, the Averi-Bajirbody road and the Bajaura-Kataula road near Ropa area were blocked by landslides.

Woman beaten to death over dowry